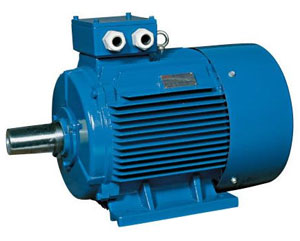 Rewinding Method
To use 3 phase motor on 1 phase power supply, we can connect any 2 phase winding coils in series, and then connected to the other phase. At this time, the magnetic flux in the two windings have a phase difference, but the working winding and starting windings are connected to the same power supply, so the current is the same. Therefore, connect a capacitor, inductance coil or resistor to the starting winding in series make the current have a phase difference. In order to increase the starting torque on the connection, an autotransformer can be used to increase the single phase power supply voltage from 220v to 380V, shown in Figure 1.

General small motors are Y connection. For the Y-type three phase asynchronous motor, the capacitor C winding terminal connects to the autotransformer starting terminal. If you want to change the shaft rotation direction, wire it as Figure 2.

Figure 3 wiring torque is too low. If you want to increase the torque, you can connect the phase-lock capacitor to the two-phase winding together in the coil and use this as the starting winding. A single coil directly connected to the 220V power supply, see Figure 4.

In Figure 3 and 4, if you need to change the shaft rotation direction, you can simply change the end-to-end direction of starting winding or working winding.

The value of the access resistor R (Figure 7) on the starter winding should be closed to the stator winding phase resistance and should be able to withstand the starting current, which is 0.1-0.12 times of the starting torque. 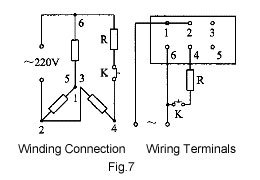 
II: Buy a GoHz VFD
VFD, short for Variable Frequency Drive, it's a device to control motor running in adjustable speeds. The single phase to 3 phase VFD is the best option for a 3 phase motor running on single phase power supply (1ph 220v, 230v, 240v), it will eliminate the inrush current during motor starting, make the motor run from zero speed to full speed smoothly, plus, the price is absolutely affordable. GoHz VFDs are available from 1/2hp to 7.5hp, higher capacity VFDs can be customized according to actual motors.

III: Buy a frequency/phase converter
A GoHz frequency converter or phase converter also can be used for such situations, it can convert single phase (110v, 120v, 220v, 230v, 240v) to three phase (0-520v adjustable) with pure sine wave output which is better for the motor performance rather than VFD's PWM waveform, they are designed for lab testing, aircrafts, military and other applications which require high quality power supplies, it's extreme expensive.

4/5/2017 7:54 AM
That was actually my academic project. I designed a 3 phase 4 pole 0.5HP Motor as main motor. Calculated capacitance required to start and run the motor. Actually had lap distributed winding and leads of each coil brought out in a panel. However connected same as Huge mentioned. 2 windings in series for running condition and 1 phase as auxiliary. End result was slow RPM around 600 RPM @50Hz in 1 phase connection. Probably because it was distributed winding and pole formation was not correct. Mostly low rating 3ph lv motors are concentric wound. And practically these motors work with 2ph in series and 1 along with capacitor. Output you can expect is about 1.5 to 2 times less than 3 phase rating.

4/12/2017 8:18 AM
To run on a 1 phase supply you need to make 2 changes:
1. Add a large capacitor.
2. Reconnect all the windings as normal motors are designed for 120 degree spaced external voltage vectors. The 6 internal windings per phase for a pole pair are spaced every 60 degrees. If we call the internal windings per phase of a pole pair A, B, C, D, E, F. The external connections are normally connected A, -E, C. You need different connections for 1 phase as A and B + C for capacitor.

4/21/2017 8:10 AM
A variable frequency drive (VFD) rectifies each pair of phases to dc and inverts the dc to the power for the three-phase output, which means a VFD can be used with single-phase input to operate a three-phase motor. Manufacturers' support can be spotty, so it is recommended to derate the drive by 1 divided by the square root of 3 (about 58%). Also note that the kW VFD rating is there for convenience in sizing drives as they are rated by current. For example, a 7.5 kW motor would use a VFD rated for 11 kW. It is recommended for the installer to talk with the drive manufacturer in sizing the VFD.

6/28/2017 4:19 AM
If you have a single phase supply and want to run a 3 phase motor, I would recommend a VFD instead of a phase converter. All you need to do is de-rate the VFD to account for the higher current required for 1 phase operation. This sort of thing is done all the time when amateur machinists purchase industrial mills and lathes and provides a smoother operation.

The preciseness of frequency and the shape of sine aren't too important. (The "almost sine" is enough...) I don't need VFD and other features.
I looked for over the internet but I found VFDs only. I though a fixed frequency 1P -> 3P converter must be cheaper than a VFD but it seems it isn't true...

2/5/2019 9:55 AM
Amazing knowledge and research. Thank you. I wish I could understand it all but my English is not at that level. I m beginning to see the possibilities. Maybe it will work, than I will send best wishes to you.
Finally some one who knows what he is talking about.
.

4/6/2019 5:09 PM
just would like to know will the power usage be the same on connecting it up from single to there phase and will the kw out put of the motor aslo be the same

8/13/2019 12:38 AM
I used a surplus 3 phase motor,  wired two of the 3 inputs to single phase through a switch close to the motor.  Spin the motor manually with a rope and throw the switch. Alternately a motor run capacitor of suitable size across across one of the other two pairs of will start it without manually spinning it.   Wire the 3 phase machines to the converter motor.   Converter has to be large enough, minimum of about 1/3 of equipment HP for starting under no load. More would be better up to equal HP of equipment motor.  Just have to be sure the motor starts the right direction so the equipment motors run the right direction. 3 phase motor starts either way on single phase. Or reverse 2 of the 3 wires between it and the equipment and it reverses direction.   I worked on my uncles crew for awhile in 1983,  his truss shop on a farm used several 3 phase machines and I would start the converter motor in the morning when I arrived.  Spin the shaft with a rope and throw the switch.  It was large.   He was pulling so much power off the single phase line it would visibly sag between the poles when the equipment was turned on, heating the wire.

9/4/2019 6:42 AM
May I use a single to three phase converter to run a three phase stationary battery charger?