Choose a VFD base on motor rated current

When a motor power is stated, it is always the mechanical power, shaft power i.e. NOT the input electrical power.

Variable frequency drives (VFD) are also (mostly) rated in terms of kW albeit it's wrong. Because VFD output is electrical (not mechanical). Mechanical power (i.e. motor shaft power) is always "active" power, where in electricity we also have reactive (doing nothing but losses) power. The apparent (total) power (stated in terms of kVA) is vectorial sum of active and reactive power components. 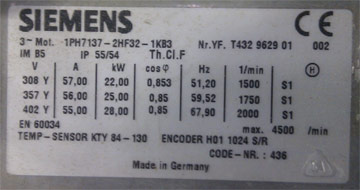 For all those facts above, GoHz highly recommend to select a VFD by matching motor current. This is the right way. Despite mathematically correct, we wouldn't select a VFD for partial load of motor. We would simply go for motor nominal (rated) current.

Even for the same current output, variable frequency drives are classified in different frame sizes. This is the answer to the question: if needed, how much extra (overloading) current can I take from VFD and for how long. For low overload demanding apps (such as fan & pumps) this overload factor can be accepted as low as %110 (1.1 x VFD rated output). For typical constant torque applications, this is advised to be around %150. So be careful VFD selection not only in terms of output current but also the overloading capability.

By the way, for some rare special apps, like rock crusher machine, the demanded overload can be as big as %200, %225. In such cases, you should choose an over-size VFD - just to meet the overloading capability.

Sometimes VFD can turn out to be the most pain-on-neck equipment in industrial & domestic zones.