The most basic difference is the power source. AC motors are powered from alternating current (AC) while DC motors are powered from direct current (DC), such as batteries, DC power supplies or an AC-to-DC power converter. DC wound field motors are constructed with brushes and a commutator, which add to the maintenance, limit the speed and usually reduce the life expectancy of brushed DC motors. AC induction motors do not use brushes; they are very rugged and have long life expectancies. The final basic difference is speed control. The speed of a DC motor is controlled by varying the armature winding's current while the speed of an AC motor is controlled by varying the frequency, which is commonly done with a variable frequency drive control. 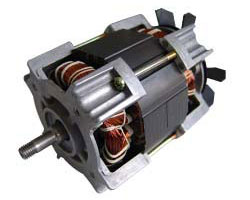 The DC motors in earlier times were mainly used when one needed variable speed and/or when one needed high speed. It is easy to vary the speed of the DC motor by just changing the applied voltage alone. Phase control electronic power amplifiers were enough to get a good control over the motor speed and torque. Such motors were used in fairly good numbers in Steel rolling mills, textile & paper making machinery, etc. The motors had a disadvantage due to the carbon brush/commutator mechanism which reduced the reliability of the machine vis-a-vis the rugged Induction Motors. However one can see a number of such motors working very satisfactorily in a variety of applications.

The DC series motor, also easy to work on AC power supply is called AC/DC universal motors is even now the first choice where high speed is required by the application such as Mixer/Blender, Vacuum Cleaner, Sewing Machine, Portable Tools, etc. Unlike the AC induction motor whose speed is tied to the line frequency, the DC motor speed can be designed to be much higher.

However, with the use of power electronic circuitry and modern methods of controls, the AC motor or the Permanent Magnet Brushless Motor is fast encroaching into this territory. But still for a wide variety of applications brush type motors are quite cost effective, reliable and durable. With the emerging trend of low cost power devices and microcontrollers the future of brush type DC motor is quite bleak, except for low cost applications. 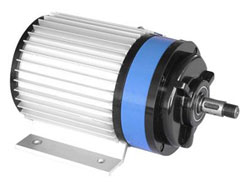 DC issues (related specifically to crane operation): high surface speeds at commutator/brush interface when operating unloaded can become an issue with brush wear and/or commutation in general. On the other hand, control or torque/speed characteristic is excellent throughout a wide variety of combinations.

AC issues (related to crane operation): Modern variable frequency drives are better (still not DC equivalent!) for controlling speed/torque characteristic. Wide speed range operation will require oversize machine, since part of range will be by voltage control and part by field weakening - this often means the AC design is physically larger than a comparable DC machine. However, the AC unit does not have the concern of sparking/flashover since there is no mechanical interface for current transfer.

PM machines can be used, but are susceptible to thermal excursions (both ambient and operating temperature), and have the added difficulty of not being able to remove the magnetic field strength which means the possibility exists for severe overvoltage of the other machine windings when operating in a regenerative or unlaoded mode at high rpm.

Modern jib/pillar cranes are typically powered by a small VFD and an induction motor. This is because of two things, essentially: the ready availability of an AC power supply and the relatively slow response required for load/speed changes. The improvements to the overall power electronics package hasn't hurt, either!