The only machines which produce reactive power are synchronous machines (motors, generators, and condensers) where the rotor field is over-excited and the power factor becomes "leading" (current leads voltage). 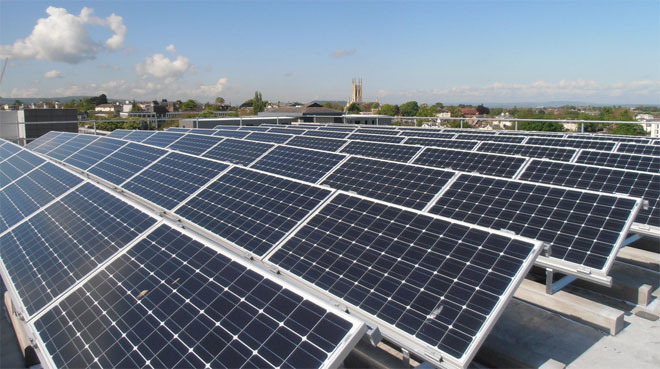 Power electronics do not "produce" reactive power. They can be used to limit the effect of an inductive load, but cannot eliminate it entirely. DC supplies (i.e. solar panels, and loads) are not considered reactive unless they include power electronics - which makes them appear as "inductive" loads with "lagging" power factor.

Solar panels won't produce reactive power being a DC generator. However, by using power converter and converting the same to AC power, reactive power will be drawn depending on load and power system parameters.

As long as question of reactive power generation using DC in alternators is concerned, important point to note there is constant field produced by DC supply is made to alternate using rotations - creation of rotating magnetic field.

It is exactly reverse process to that of Induction motor. In motor, alternating field will cause rotations and in alternators, rotating field will induce alternating power which in turn can always supply reactive power depending on load, voltage profile to be maintained at the bus and similar factors.