Basically, there are two types of chillers - constant speed and variable speed. The demand on the chiller varies all over the map depending on several factors that are beyond your control. Suffice to say that the load can range anywhere from 25-100 percent of rated capacity.

With a "constant" speed chiller design, we can either cycle the chiller more frequently or close the valve for light loading conditions requiring less flow. This is inherently less energy efficient than a "variable" speed system, where the flow is controlled by compressor speed and valve stays open.

Cycling the chiller means starting and stopping: for some few seconds during each start, the motor draws high current (and probably the voltage dips a bit), resulting in some small spike in energy consumption. If the on-off cycle means that the "off" duration is at least as long as the actual acceleration time of the compressor, the difference in electrical usage (averaged between the two periods) is almost negligible compared to full load running. 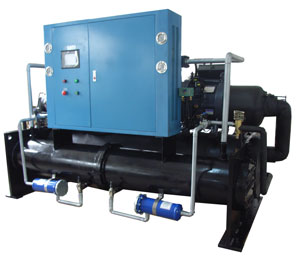 Using a soft start limits the peak current value - but extends the acceleration time when compared to a line-start. Some energy gets saved, but not anywhere near as much as one might think. This is because the TIME involved with the savings is fairly short - on the order of several seconds.

A far better means of reducing overall energy consumption is employ a "variable" speed chiller design - which typically means using power electronics to control the speed of the compressor drive motor. Match the torque capabilities of motor, drive, and compressor to ensure there's enough to actually start the system! Variable speed is the best answer if energy efficiency is critical. Depending on the power and speed, a standard squirrel-cage induction motor with a variable frequency drive is normally the most cost efficiency solution. If the chiller isn't enquires to operate at full capacity 100% of the time, the payback time for such a system can be quite short.

To have an even larger impact on the bottom line - look at the rest of the mechanical side of the design: piping runs, valves, chiller thermal efficiency, compressor mechanical efficiency, etc. There are great gains to make on that side of the equation, in most instances.