How to select a passive harmonic filter?

I am in the process of designing a harmonic filter for a client and to tell the truth, if you never done this before, it is much more complicated than it seems.

You have to know if the source of harmonic is a voltage or current source. The best is to know the equipment generating them and be able to estimate precisely the amount of harmonic present in the system. If you are lucky it is a current source and you may wish that your filter will not change the amount of harmonics. Then, you need to know precisely the impedances of everything around the filter which could easily untune the filter as it will surely impact the resonance frequency or at least the Q factor and the bandwidth of the filter. Then you need to calculated the factor of amplification at the resonance frequency (I call it the devil frequency) and the level of rejection obtainable (I call it the angel frequency). Then, you have to calculate the losses in the reactors and the capacitor, as well as the level of Vars.

I do not trust commercial software to do this type of design. I always write my own analytical programs because from experience, the practical case is never what the software programmer had in mind, or was assuming. Beside the fact that I found some commercial software are not calculating correctly for whatever reasons. I would never put a penny of my own money based on answers provided by a commercial software without verifying it by my own calculations, That way I can spread my analysis to include equipment tolerances, grid voltage tolerances and scan within those ranges for all conditions to define the worst case scenario

The most common mistake designing filters is to assume that there is no harmonics on the network side. In fact, your harmonic filter could become the trap filter for an entire area and eventually fail. Worst case could be that the resonance frequency is chosen where no harmonic exist on the load side, but exist on the source side. In this case, you would be highly amplifying those harmonics to a level that will destroy your filter. Commercial software is designed based on simple assumptions which often have little to do with real life.

Steel factories are some of the worse loads. Loads can go from very light to extreme overload (300% current limit). Also, the production line relative speed of motors compared to maximum production line speed will directly impact badly the power factor under this variable load. If the drives were design to work with a minimum firing angle od 30 degrees to use only the linear function between AC & DC conversion, the power factor can go from bad to worse. 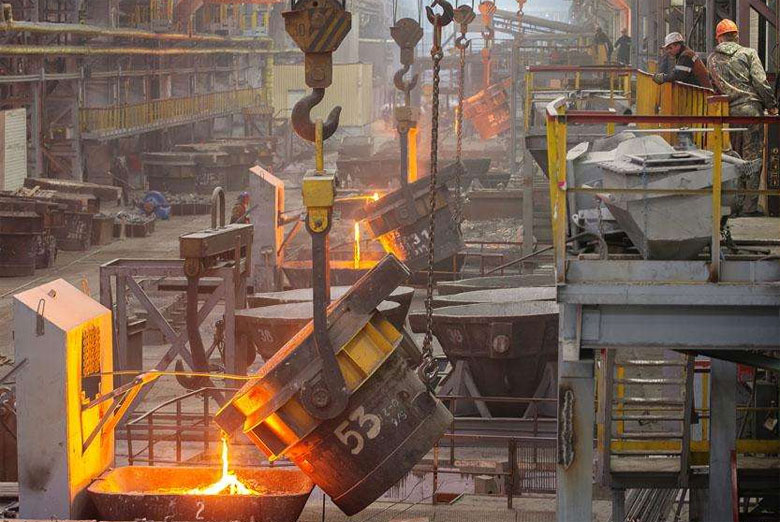 On large systems, I have used harmonic cancellation through delta/wye, delta/delta and delta/zigzag transformers. If you only use delta/wye transformers, you have a major problem as the filter will have to be tuned at a very low frequency, and will be huge to handle most of the harmonic currents. Putting it on the MV side is maybe not best as those harmonics are impacting all the other loads connected across the line inside the plant, and overheating the main substation XFMR. Not good.

I used transmission line impedance graph in my calculations to see the current spectrum injected in the utility grid. However, saying that the filter needs to be tuned at that frequency is not something I could agree (or disagree) or use as a design base, because it has no relation with the load harmonics. It has only a collateral impact on the line impedance used in the calculation. The impedance graph will show a spike followed by a low of impedance at 2 frequencies, that is all what the graph says. On the other end, it could be seen at a low or a high frequency, which has nothing to do with the harmonics that I have to trap in the filter before they embark onto the line which will usually be at a frequency other that the line resonance frequency.