You can find a simple explanation of what an induction generator can do. It is totally self-synchronizing with the grid it is feeding power into. It stays in sync and delivers energy as long as it is driven at an rpm higher than its synchronous speed. If it is feeding a 50 Hz power supply it must be driven 2% to 5% above ts sync speed. Sync speed is 120 X frequency / number of poles thus a 4 pole machine on 50 Hz power supply must be driven at 1500 plus 30 rpm min and 75 rpm ideal. Speed range 1530 to 1575.
The output of the induction generator will stay locked exactly to the grid it is driving into over that speed range. In other words gents the sync is independent of speed. 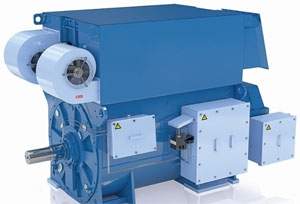 As to the questions of power capability it is better to use many such machine combinations coupled in parallel to one bus-bar. By matching motor and generator efficiency of > 75 % is easily achieved while both machines are operating close to full load rating.

I can tell all of you that the harmonics caused by semiconductor converters are causing serious problems in all sorts of places and it will only be a few years before every one has to have a rethink about using them. Grids that are being fed by large number of wind generators are already finding that the problems are becoming intolerable. It has become fashion to have wind generators feed the grid via semiconductor conversion equipment, in some instances the harmonics are being generated in the RF range and 50 Hz and 60 Hz systems can be badly affected.

11/29/2016 10:13 PM
How do I prevent the generator from motoring when the wind speed is to low to drive the generator at or above above sync speed. Thank You in advance.

12/29/2016 6:02 AM
Synchronization of power supply is two power sources connecting together. After synchronization two power sources, they have same parameters like same voltage, frequency, phase sequence etc. If new load coming, both Generator takes care. Power flow will be balanced with its AVR & generator control.
Conditions to make synchronization of generator and power source. Voltage, frequency, phase sequences of incoming Generator must be equal with existing Generator.
After matching the above said parameters, synchronizing breaker will be closed. After closing breaker, we should be control its excitation, power flow from one generator to next one. but, Now a days Automatic synchronizing relay takes care this controlling parameters. Generator AMF panel take care all the responsibility without manual operation. When Grid power fail, Generator power comes to the load side through AMF panel. When Grid power enters, Auto synchronization relay takes care the source paralleling operation, Grid power will be resumed without power block out / power disturbance.