The use of Aluminum Conductor in US

Many general contractors in many states here in the US were using aluminum wiring in housing and commercial structure construction in the 1970's, possibly later, maybe a bit earlier. I'm not sure if it's still the practice, but I hope not. There are problems with it, some of them realized after fires occurred. Wall plug sockets in the US use plated screw connections and/or compression/latching connections. The 'hot' lead connecting screw terminal is generally brass plated, and as such typically not reactive with aluminum. The neutral lead screw terminal however, is generally zinc plated and 'batteries' (reacts electrolytically) against the aluminum conductor, more so when there is current flow. Crimp connect terminals were suggested as a corrective measure after problems with aluminum wiring began occurring, 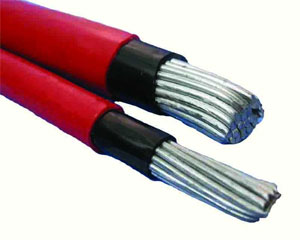 but most of these terminal types are also zinc plated and were as such not a viable fix. In compression type wall socket connections, solid core conductor is inserted into an orifice where the terminating spring loaded connection latches on the bare conductor, the issue was exacerbated as it was impossible to check the connection. These frequently loosened excessively as the aluminum deteriorated. In general construction, when I owned a company doing work for the Military, using zinc plated screws to secure any aluminum framing was forbidden, also because of the electrolytic reactivity. Stainless fasteners were the typical solution.

Using electrolytic conductive paste/grease for aluminum conductor connections is something my company has been doing for at least 40 years. We manufacture and sell up to 1,500 Amp Aluminum moveable system conductors, but with stainless steel inserts for the conducting surface. These are pressed in and the connections points between the 10 to 20 foot sections are plate bolted, also with electrolytic paste applied. Where my main concern of commentary lies, and it's my fault for not being more explicit, is with 120 VAC circuits using wall switches, plug sockets, etc, in dwellings and structures. In overhead power lines, depending on the voltage and current levels, hollow aluminum conductor is employed in the US almost as a constant. Sometimes hollow aluminum with an iron core is employed. Typically, this is found in high tension lines above 5,000 VAC. The feed to my home is 230 VAC, Single Phase, and is also aluminum. It is connected to the metering assemblies outside the home, where the proper type of connection is used to maximize safety and system life span.