Load Commutated Inverter (LCI) is a system with an input thyristor bridge and an output thyristor bridge. The input bridge is naturally commutated by the AC supply and supplies DC current with harmonics into a large inductor. The output bridge operates at low speed by turning on a set of 2 thyristors to pass the DC current into the generator's stator to cause it to rotate. As it rotate the first set has to be switched off and another pair turned on to keep the generator turning. 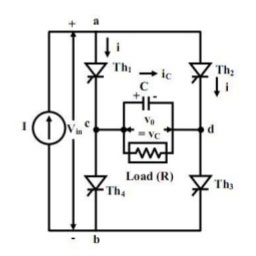 There are significant output torque pulsations and complex AC supply harmonics with many circuit variations. Normally a three phase segregated bus bars and special protection and isolation is needed on the output for power station use. The DC mid point voltage varies with generator speed and the AC power factor varies from low to high.

As it is acting as a motor during run up the normal no load field current is applied at no load and as load is applied extra field current has to be applied to keep the air gap flux constant. This is done in the control system normally by looking at the V/Hz ratio. The applied frequency from the load commutated inverter output thyristors is set by the rotating speed of the generator

LCI make stating for gas turbine from turning gear speed at 6 rpm and make synchronous generator act as synchronous motor with variable voltage variable frequency by inverter and converter thyristor control by this LCI makes accelerate velocity from 6rpm to 30 hundred percent rated speed in approx. 5 min and then make purge for all gasses in turbine hrsg at constant speed for purge time about 15 min after that LCI make coast down hint power output from LCI during coast down equal zero so that turbine accelerated speed from 30 hundred percent to 14 hundred percent in about 5min at this speed turbine fire start with LCI main that mechanical tours plus electrical torque to accelerate turbine from 14hundred percent to 90 hundred percent hint high power supplies by LCI during last acceleration and also high magnetic flux generate during last acceleration by V/Hz after that LCI go out service with excitation system and then excitation system enter system again.

11/22/2017 11:06 AM
Please check the English in the last paragraph! " A long sentence and very difficult to understand! It seems that it is a translation from  some other language using  tools like Google Translate.