Many people think that UPS is a magic box that solves all the electrical problems. UPS systems have capacities varying from few hundreds of VAs to massive kVAs. The only thing that is worth noting in a UPS system is that, it can be viewed as a source as well as a load. Depending upon the configuration, the grounding needs to be planned. If the UPS system is transformer based, and operating only in inverter mode (Frequency converter mode), then it is called as separately derived source and output neutral should be grounded. If the UPS is not configured as a separately derived source (Bypass source is available), then whether the UPS has transformer or transformer-free, the output neutral should not be grounded. Newer systems having IGBT front ends transformer-free uses input neutral (3 phase of large capacity) also. For such configurations, output neutral cannot be earthed. 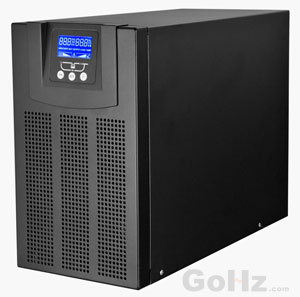 As a standard installation practice of UPS there is no separate earthing is required from system point of view. Of Course, UPS panel shall be earthed for safety reasons. The system earthing for the load distribution gets the earthing via service switch of UPS scheme.

Below points shall be noted to understand for above statement of "no separate earthing" requirement: