In variable speed drive (VSD) systems, both AC and DC, the first stage of power conversion is from AC to DC. In a DC drive, it's the only stage - from fixed AC to variable DC. In an AC drive there are two additional stages: filtration and inversion back to AC.

The simplest converter is a full-wave diode bridge, which converts the incoming AC to a fixed DC voltage. This isn't useful in a DC drive, but works fine for AC variable frequency drive (VFD). Standard industrial drives - both AC and DC - use six rectifier devices to form a three-phase full-wave bridge. This type of converter is called a "six-pulse" design, because it draws current in six distinct pulses from the AC line. 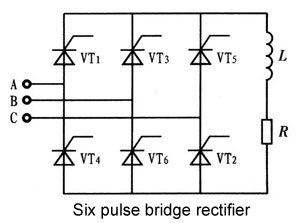 How much distortion occurs is dependent upon the capacity of the circuit feeding the converter - that is, what the available short-circuit current is. If the converter is sized such that it is a significant percentage of the available capacity of the system (or there are multiple drives on the system, such that their total load is a significant percentage of total capacity), then the distortion can be significant. This distortion can be mathematically represented as additional voltage waveforms applied to the fundamental voltage in integer multiples of the fundamental frequency. These additional voltages start at a multiple of 5, and (for three-phase systems) skip all multiples of 3. This is called "harmonic distortion." For drive systems, the 5th, 7th, and 11th harmonic (for a 60 Hz system 300, 420 & 660Hz) are the most significant harmonics.

In order to reduce this distortion, a larger source can be used, but this is generally not economical. The next option is to reduce the amplitude of the non-linear current draw. The easiest way to accomplish this is to add phase-shifting transformers and use extra full-wave bridges. If a transformer is added in front of a converter with two secondary windings, one connected Delta and one connected Wye, there will be a 30º phase shift between the outputs of the two secondaries. With two full-wave bridges, one connected to the Wye winding and one connected to the Delta, the peak current draw on each circuit will be half of the single bridge, and one current peak will be shifted by 30º in time from the other. On the primary of the transformer, this translates into two, lower current spikes per phase (12 pulses in total) and less potential for harmonic distortion of the distribution system. 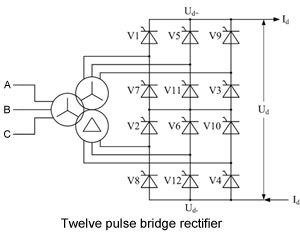 In general, a 12-pulse drive system is better than a 6-pulse drive system, but unless your distribution system has a large proportion of non-linear loads on it, harmonic content is (generally) not particularly concerning. IEEE has standards for acceptable harmonic distortion levels for general and critical distribution systems with standard 519, but even now two decades after its initial release, it isn't applied very well in the real world. Instead, manufacturers build drive equipment that will meet the IEEE 519 requirement at the drive input terminals pretty much regardless of whatever the source supply looks like. This requires an 18-pulse bridge (and correspondingly expensive input transformer) at a minimum, and generally 24-pulse or higher for large drive systems. As an alternate, "active" front ends consisting of what is for all intents and purposes a transistor based inverter section can also be used. Multi-pulse and active front-ends add significantly to the initial cost of the drive equipment over a simple six-diode full-wave bridge.

5/27/2020 7:12 AM
Up to 72 pulses are found in very big applications (mineral crushers/mills).
They are needed to improve efficiency and reduce harmonics.