What let a VFD feeder breaker trips when turn it off?

Variable frequency drives should be protected by fuses. Why? Because the VFD itself has all the protection you require for your motor so the only item you are protecting is the Rectifier and DC bus. Then you will find it is actually really impossible to protect it as when it has a fault it is generally catastrophic and all you wish to do is to remove the faulty VFD from the network to enable the rest to continue. This must be as fast as possible to limit the damage and MCBs don’t really meet these criteria. Get some information on how many times an MCB can take a full current trip and be reset. You will find that in the small print it states once and then test before closing. 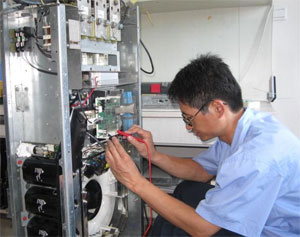 The construction of the VFD has the initial front end where the AC is converted to DC. This has a rectifier and some very large capacitors to enable the DC to be as smooth as possible. If the variable frequency drive has been standing for a while (Greater than a few hours) the inrush current to charge the capacitors may be the culprit. Please also read the instructions when drives have been off for more than 3 months. There is a whole section on charging the capacitors at 25% for so many hours and building all the way up to full voltage. This is why standby VFDs blow when used. Also why it takes so long to get a delivery in a hurry. The OEM has to charge the batteries. More modern drives have this built in to protect them.

Variable frequency drives also have something called pre-charge. This is to get the DC bus to the level required before it is used. The DC bus sits at a normal level and when you turn on, it will charge the bus to get going and this can be complicated by some really fancy requirements like high starting torque. High T requires a higher voltage so the rectifier which is now a SCR (Silicon Controller Rectifier) fast cops the AC to get spikes with a high RMS which is smoothed with inductors and capacitors. This can cause even more inrush currents. Consider an input choke. Look at the grading of your MCB and go for a C curve or if it has settings that can be adjusted, look at increasing the VFD rating or time. All of this must only be attempted after analyzing the risk and with an in depth knowledge of what you are doing or seek help. Ensure that your setting does not exceed the ratings of the cubicle or Motor Control Assembly that you are working with and that you have the correct discrimination.

5/30/2020 9:38 AM
Capacitor is Filter circuits in VVFDs can cause the blow of VFD module during charging after a long period of stand by or minor leakage of capacitors. It may trip the incommer breaker, phase unbalance intermittently.