Why capacitors in VFDs exploded?

I had an oil filled motor start capacitor blow once. What I think happened was when someone replaced it, rather than putting it back in its holder, they duct taped it to the side of the squirrel cage motor that it was starting. They started the motor up and walked away. The motor was a continuous duty motor so it wasn't turned off for a long time. One day, someone shut it off to do some servicing. They noticed a bit of oil on the floor but didn't think anything of it. They performed their maintenance. When they went to turn it back on....bang. My guess was the oil mentioned in the notes was from inside the capacitor. It likely overheated, expanded, cracked the capacitor case and leaked out. 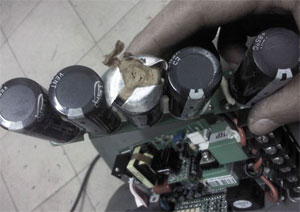 Another anecdote, I was talking with a colleague who purchased a variable frequency drive (VFD). They purchased a spare in case they had a problem with the one in service and needed a quick change out. The second VFD sat on the shelf for almost 4 years. One day, they needed to change the VFD. They took the spare out of storage, installed it, closed up the cabinet and turned it on. Within seconds, they heard a bang in the cabinet and lost power. What wasn't done was a visual inspection of the capacitors. It appeared that there was a bit of corrosion present in the input filter capacitor bank. That likely meant moisture...two problems that are not good for capacitors. Even if there was no corrosion, that VFD should have sat at ambient temperature in a non-saturated humidity environment for 24 hours to give any condensation a chance to evaporate before using the VFD.