What is a Gearbox and What does it do?

Gears are used for transmitting power from one part of a machine to another. In a bicycle, for example, it's gears that take power from the pedals to the back wheel. Similarly, in a car, gears transmit power from the crankshaft (the rotating axle that takes power from the engine) to the drive shaft running under the car that ultimately powers the wheels. You can have any number of gears connected together and they can be in different shapes and sizes. Each time you pass power from one gear wheel to another, you can do one of two things: 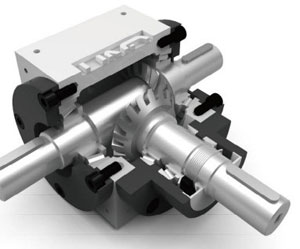 Change direction: When two gears mesh together, the second one always turns in the opposite direction. So if the first one turns clockwise, the second one must turn counterclockwise. You can also use specially shaped gears to make the power of a machine turn through an angle. In a car, for example, the differential (a gearbox in the middle of the rear axle of a rear-wheel drive car) uses a cone-shaped bevel gear to turn the drive shaft's power through 90 degrees and turn the back wheels.

To be very precise, Gearbox is a mechanical device used for torque increase/decrease via speed reduction/increase. It consists of two or more gears with one of the gears driven by the motor. The output speed of the gear box will be inversely proportional to gear ratio. Gear Boxes are typically preferred in constant speed application like conveyors and cranes where it can provide increase in torque.

There is couple other with own peculiarities (like eg. ball screw which is also gear head but we typically do not refer to them as gear heads). Note also that gears do not run for free which means you are losing the output power which means, gear has certain efficiency. There are various type of gear heads: spur, planetary, one stage, multiple stages, harmonics, spur-epicyclic, (cycloidal), worm etc and combination of the above but this is a whole, separate science.